Moving to a new city without any mates – let alone a fishing buddy – was something completely unfamiliar to me and somewhat daunting. University and college fixed the mates problem pretty quickly; however, I was still without a fishing buddy. So I set about trying to create one; to teach whoever was keen the basics of flyfishing.

In this piece, I’m going discuss the things I’ve learnt over the past few years teaching my mates how to flyfish. But first, let me disclose that I’m no fishing guide or casting instructor – just someone with a passion for flyfishing who wants to share it with others. The following tale explores all the mistakes I made teaching flyfishing; and how each mistake helped to improve the process for the next mate. My hope is this might inspire you to introduce someone new to flyfishing and help speed up the learning process by skipping my errors! 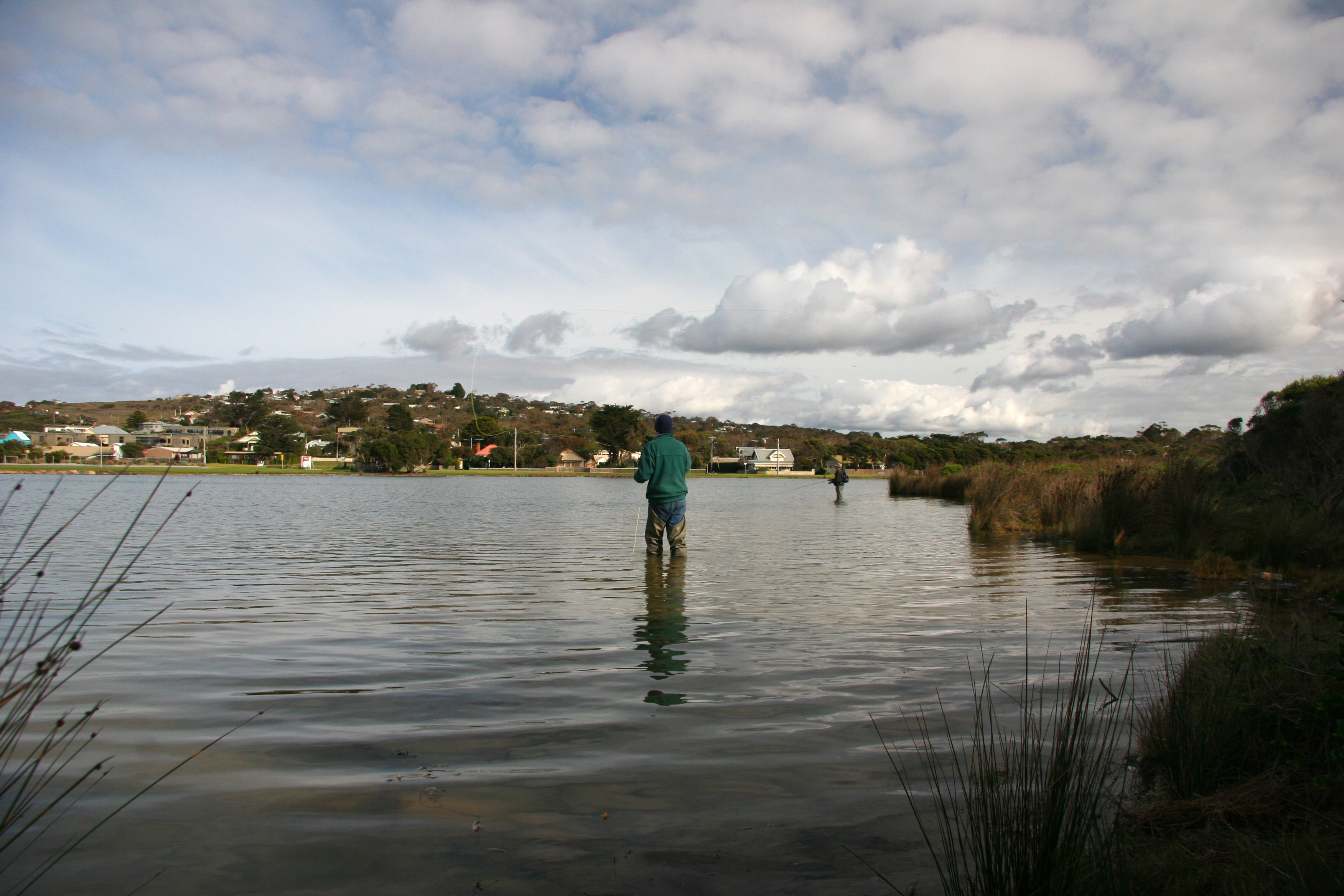 Estuaries and light saltwater are great options for getting started if the streams are closed, or trout water is too far away.

If you’ve been flyfishing for long enough, you tend to forget the core basics as they become routine and habit. How you make a certain cast work, is in large part due to muscle memory. Making that gentle but accurate cast along a grassy edge (with the hopper landing with just the right amount of ‘splat’) might seem second nature to many trout anglers, but it’s not to your inexperienced mate. Suddenly you are back at square one, standing in a river trying to explain the basic physics of a fly cast. Remember, your mate has no muscle memory related to holding a fly rod, let alone fly casting. It’s no surprise that starting with the absolute basics is what I’ve had the most success with.

Start on the lawn at home or the park. Not only does the lawn have fewer distractions, it’s also without fly-hungry trees and bushes.

When I say start at the basics, I mean basics. Have your mate assemble the rod, thread the fly-line through the rod, and attach the fly. Not only does this make them feel more involved; it also allows your mate to see how the rod, fly-line and leader interact. They can notice for themselves that the fly-line has weight and is tapered to the leader, which is tapered down to the fly. Going through the process of setting up a fly rod, helps throughout the rest of the day as you move on to other things like fly casting.

The first few times I put the rod straight in my mate’s hand and began explaining the cast, progress would be very slow – until I would notice the grip was wrong. Casts start from the connection between your hand and rod, so before anything else, set them up with a relaxed but firm grip which transmits energy straight from their arm to the rod. A thumb-on-top grip is one good option. At all costs, avoid the stranglehold squeeze-to-death grip!

If you’re like me, you’ll be introducing your mate to a local trout stream. At first, not having to make long casts to catch fish really helps. If you’re not near trout, try chasing bream around pontoons or searching for flathead on sand-flats. Wherever you choose, pick a location with minimal casting obstructions, leaving plenty of room for your mate to develop their cast. YouTube is full of great casting resources so why not use them? You are probably not an expert at teaching casting, so why not have an expert help explain via a smartphone or tablet? A good casting video might touch on something you missed and could be the catalyst to enable your mate to consistently turn over their leader.

Something that’s easy to forget is, just because you catch fish every time you hit this creek or flat, doesn’t mean your beginner mate will. Getting your friend into flyfishing should focus on the overall experience. If they tie a good knot, notice a rise on their own, or make a decent cast to a likely lie, acknowledge it. Catching a fish really is only a bonus at this stage. The trip, the sights and sounds once on the water, new places, a beer and a good meal at the end… They’re all part of a great day. Just being out there makes for a pretty good day!

So now your mate has a rod in their hand (with the correct grip) it’s time to begin helping them to cast. I’m not going to attempt to give step-by-step instruction here; it’s a dynamic process best left to in-person instruction, or the casting tips in Peter Hayes’ latest Being Better column.

Keep in mind that fly casting is an unnatural or ‘counterintuitive’ action for most people, so be patient – they’re attempting to propel a very long, skinny projectile (the fly-line) that’s quite unlike the sinker or lure they may have cast before. So, one of the best pieces of casting advice you can give your mate early on, is not to do what ‘feels’ right, but rather, to do what good instruction describes. The natural, ‘muscle-memory’ cast you already have, takes a little while to develop.

As I said, I’m not going to describe how to cast here, but it is worth pointing out a few common issues I’ve noticed when helping friends learn to cast:

Checking out a deeper, slower pool as casting improves.

When the fish takes

Because learning to cast is such a big deal, it’s easy to forget to explain what happens when it all comes together and a fish grabs the fly! This is something I neglected to cover one day, and on another day, I didn’t give enough detail. On both occasions, it resulted in missed opportunities. So once you feel your mate is getting some respectable casts out there – maybe good enough to induce a take – ask them to stop for a second and explain what happens when a fish grabs the fly!

For trout fishing, I explain that setting the hook is not much different to picking up the fly to recast. Once the indicator goes down or the fish grabs the dry, raise the rod as if recasting, then keep the rod high and maintain tension. I’ve found one way for a beginner to practice, is for me to grab the tippet at water level and at a distance, have them strike, then maintain a high rod and practice slowly stripping line as I move closer. Although they may end up ‘on the reel’ (and practice this too), ensure they can strip line. (I’m also guilty of skipping this point, only to have my mate lose a fish because they simply did not know what to do once hooked up.)

Ultimately, I feel that introducing others to flyfishing has made me a better flyfisher. Having to get back to the basics and slow things down, has made me suddenly realise the mistakes in my own approach. Watching your mate slide around while trying to cast and wade a river full of slippery rocks is quite funny. However, when reminding them that they need to stand still while casting, you realise you often make the same frustrating mistake.

Moving slowly and reaching out to keep that drift drag-free – do you do as you teach?

Taking the time to move more slowly up a river, looking for casting obstructions behind you before casting, stopping to look for rises and checking tail-outs for fish: these are just some of the things I’ve improved upon since I began teaching my mates flyfishing. Stop and observe the mistakes your mate might be making, and think to yourself, ‘Do I do the same?’ You might be surprised!

I want to challenge every flyfisher to introduce one new person to flyfishing each season. The outcome might simply be a mate who enjoys the day but never touches a fly rod again… or it may be the spark which starts someone on a lifelong journey! Regardless of the outcome, in this increasingly geometric and tech-driven world, it’s important to get outdoors experiencing nature; not just for one’s mental health but also to find a challenge in a new activity. With the first trout (or fish) on fly, there’s no such thing as ‘too small’.