Tantangara Reservoir with a glassy shoreline

On the right winter’s day Tantangara Reservoir offers great polaroiding. But this year we’ve had a lot of wind, rain and snow, much more than usual during this climatic phase. And of course we’re very grateful for that but they’re just not the best polaroiding conditions. Ideally for this lake, you need no (or only light) wind, and no cloud, and lots of sun in the right position. In a normal winter this might be one in every two or three days, this year, well not that good by a fair margin.  But yesterday was epic.  The wind was north and north west and then west; which made fishing the western shore from late morning to mid-afternoon perfect – once the sun got past its zenith and I grew a shadow. The lake is at 50% today which is a lot for Tantangara because it’s really just a pondage for Eucumbene diverting the Murrumbidgee catchment water into the Snowy catchment through the Providence portal. This means the tea tree and tussocks are under water for the first time in a couple of years. 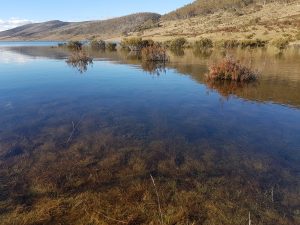 The first fish I saw was literally right at my feet. I froze and it completely ignored me as – and then I got a couple of casts to it as it swam away. I’d been stripping big flies with an intermediate line, off a deep bank, so switched rods and marched off after the fish. The edge of the lake changed from deepwater to a shallow bank where the rising lake had covered the tussock and grass – and the fish were so easy to spot. I walked up and down the same 200 metres of bank as a procession of small rainbows came through. They had definitely not been there half an hour earlier! I don’t think the fish like the sun right overhead; maybe it’s a predator avoidance thing, or maybe they can see their prey better when not blinded by the sunlight.

Anyway, I could not catch one. They’d come and look at the fly, and at first I thought they were a bit spooky, but they didn’t spook as such. If anything they were super relaxed, just not interested.  It was great fun – but a bloke can only take a certain amount of excitement so I started the long trek back to the car. I spotted a couple of experience polaroiders walking towards me. You can always tell when people know what they’re doing.  One guy up the bank spotting for fish; the other right on the bank, a few paces back, ready to follow the spotter’s instructions. We met up right next to a gully and shot the breeze for a while. It turned out they knew Editor Weigall. 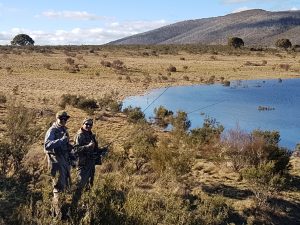 Rod and Ash, originally from Shepparton, more recently from Cooma. These guys have the “Crazy Trout Hunter” Facebook page and they do a great job of promoting catch and release and sustainable fishing so go on, “Friend” ‘em. Anyway, there we are blabbing away and a 5lb brown swims right in to the gully. Like true gents, they gave me the cast (although Ash was out of position and Rod didn’t have much choice as I thrust my second rod into his hand). I got a cast out and the two nymphs plopped and started to sink. The fish swam over, stopped, watched them settle in the mud and swam on. I got another cast in and the same response, and then another before it swam out of sight. Then it turned around and had another swim through the gully – doing laps – for the same result. And then it came back again. Now I definitely had to leave. Rod thought the nymphs sunk a bit quick – which is ironic because I had just degreased the leader to get them to sink. But he also commented the rising lake had brought some beetles out of the trussock/brumby dung, so maybe the fish were more interested in things going up than things going down? 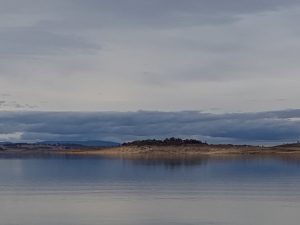 Today I went to Coppermine Bay west of Adaminaby in the boat. The trolling reports were that fish were there in some numbers and I saw a couple caught by the one other boat in that part of the lake. Another spectacular day although the high level cloud kept the sun at bay. But at least my relentless Woolly Bugger stripping got me two small rainbows. I don’t have the words right now to describe just how beautiful and peaceful the lake was this afternoon.

Eucumbene is up a lot at 45%; and Jindabyne down a notch at 87%. Water everywhere. Some good reports from Jindabyne with fish amongst the flooded tussocks, and Buckenderra has been giving up a few 2lb plus rainbows right before dark. A troller picked up 8 fish from Cemetary Bay on Saturday afternoon. However, I should warn you, right before dark on Friday night at Yens Bay wasn’t for the feint hearted. The lake was 5 degrees – air temperature a notch above freezing, “but felt like” a lot less. Unlike fishing a cold morning, you don’t have the sunrise to look forward to.

What a great weekend.