To view this content you must at least be a PREMIUM subscriber.

One week out from a trip planned 6 months earlier and the preparations were for snow, rain and freezing cold nights so common in the Tasmanian highlands; even in early summer. Fast forward 8 days and there I was with friend Craig, hidden behind the ‘thorny devil bush’ (well, that’s what we called it!) on […]

Billfish of all species are considered to be at the extreme end of flyfishing targets. Of these, sailfish are thought to be the fastest fish in the ocean. To put in perspective just how fast, a sailfish can swim at around 112km/h while a tarpon comes in barely half as quick with a top speed of ‘only’ 56km/h! It makes sense […]

Over winter, the AFO team hosted their annual milkfish trips to a remote location on the west coast of Cape York. The phenomenon our guides found there 6 years ago, provides one of the only targeted milkfish fisheries on the globe. It’s true milkfish are caught elsewhere but these are often cast-and-hope fisheries where you put your weed fly in amongst a carpet […]

As part of Channel 7’s @Home series screened on Saturday nights to promote the AFL Players official charity, Ladder (http://www.ladder.org.au/) Western Bulldogs ruckman Will Minson tells us he feels most at home on the water flyfishing. “I can spend a whole day fishing, and not catch a trout, and it’s still a bloody good day.” Will says. […]

Even narrowing the field down to my absolute favourite Montana shots, our ruthless designer was only able to accommodate some of them in this issue of FlyStream magazine. So here are a few that didn’t make it.

A few weeks ago my good friend Dave made the long drive down from Sydney and we met up on the Spirit of Tasmania for the overnight voyage to Devonport. After docking, we set off for the West Coast. The area’s reputation for wilderness and wild weather proved justified and our 4×4’s got a solid […]

About 25 years ago brother Mark and I got off the plane in Launceston and just about kissed the tarmac in gratitude at the prospect of an upcoming week at Bronte Park. We loved Bronte Lagoon in particular (still do) and it was all we could do to restrain ourselves from driving the hire car […]

By November, most rivers are open to fishing in New Zealand (the rivers around here in the north of the South Island mostly open in October.) However it is springtime and that usually means rain. But don’t be put off by the chance of spring rain and high flows; with a bit of effort you […] 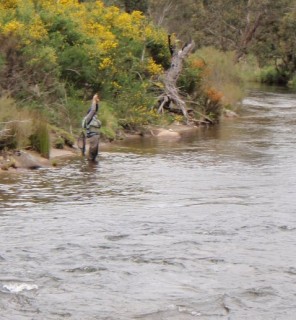 For my former www.nakedtrout.com.au blog readers this is where you’ll find me blogging in future. In this FlyStream blog I’ll focus on the the Snowy Mountains lakes and rivers. The old website is still there of course with details of charters, Dixieland, and the cottage. This week the weather has been kind. As Sydney dealt […]

I seem to have a lot of friends called Andrew and one of them is making the transition from stream fishing to lake. Andrew is what I would describe as a born flyfisher. For example, although he’s relatively new to the sport as a whole, Andrew already spots fish almost as well as I do […]