Post lockdown, I like many have been desperate to get out of Melbourne. I floated the idea with my wife Lauren of the two of us camping at Ritchies Hut on the Howqua. I think some hospital work stress combined with decision fatigue played in my favour and she agreed. For her, I don’t think there was much concern where we went, it was just important we went.

Camping is rarely stress-free and so to make life easy, I planned just the one night camping on the Howqua, and then one night at Merrijig in the hope a fish on the Delatite might round out our adventure. It’s a two hour walk to Ritchies Hut on the Howqua, and so going for just a night means there’s space in the pack for a bottle of wine, plus some less campy food. Important additions when you’re with a non-fishing companion.

I’ve wanted to retrace the steps of Rob Sitch and Tom Gleisner’s A River Somewhere episode for as long as I can remember, and so to get Lauren up to speed, I suggested she watch it before we jumped in the car Tuesday morning. To my delight, the Howqua appreciation screening worked a treat and Lauren began to show genuine excitement. 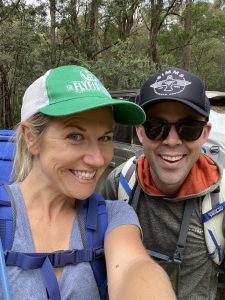 Looking fresh before a long walk!

Bags packed to the brim, we hit the road. After a short pitstop in Mansfield, we were soon at the 8 mile on the Howqua. There had been a decent dump of rain a few days earlier and so the river was high but still crystal clear. I was peaking, but trying to contain my excitement. I didn’t want to turn our well-earned post-lockdown getaway into a full-blown ‘can’t think about anything outside fishing’ fishing trip. 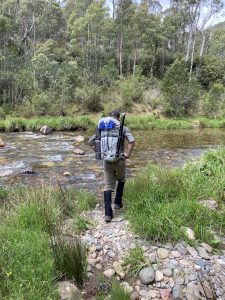 One of 12 river crossings on the trail.

It was less than 20 steps before we saw our first black snake and so my focus shifted slightly from fishing, towards making sure there were no casualties before we got to camp. Truth be told, Lauren handled the next 9 snake sightings far better than myself. It seems that hot weather straight after rain gets the snakes quite active!

When we got to camp we had quick look around Ritchies Hut, which has been beautifully restored and is well cared for by its frequent guests. Fortunately, we had the place to ourselves, which I suspect is rare given its popularity amongst bushwalkers and student groups. We set up camp and I strung up the rod.

We made our way down to the pool just up from the hut. Second cast with nymph under dry and I was into a fish. Perfect start. Lauren and I continued upstream and caught several more. We wet-waded and Lauren’s hiking boots offered zero grip on the slippery rocks as we struggled our way upstream. In hindsight, I really should have got her some wading boots for the trip, but I guess I’d envisioned going off on my own for the actual fishing (as I had done on several trips with Lauren before). It seemed the A River Somewhere screening had made quite the impression! So much so, she even asked for the rod to give it a go. Despite some bloody awful teaching, the fishing was so hot that she soon hooked and lost a nice brown (see video below). It was time to head back to camp as hunger had set in, coupled with the realisation of how far upstream we’d gone. (Lauren’s first taste of ‘What’s around the next bend?’ syndrome.) 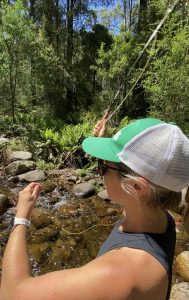 The next day we walked the track upstream to where the 16 mile jeep track hits the river. I had hoped the walking track might come close enough to the river that we’d be able to fish the way up a bit, but the river proved virtually inaccessible because of the steep descent from the track to reach it, plus blackberries. When we got to the jeep track we made our way downstream and fished our way back up. In contrast to the day before, the dry fly was in favor. I clipped the nymph off and Lauren had another go, this time managing to land her first fish on fly, a pretty little rainbow. 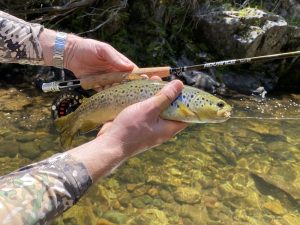 Nice brown on the dry.

We walked back to camp and made a hearty lunch which got us fuelled up for the hike to the car at 8 mile. On the walk back, we encountered a spin fisherman and I’m sure the little fishing I did on the walk out was in secondhand water. Despite that, I still caught a few and polaroided some crackers which I stupidly rushed and spooked. 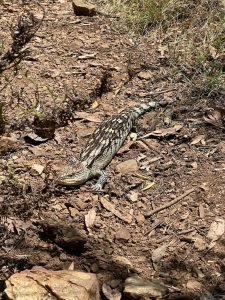 Hooked up on the way home.

All in all, the Howqua was bloody magnificent. And while there’s no doubt the water between 8 mile and Ritchies does see some anglers, there’s more than enough water which would rarely see traffic. Those willing to put the time in on the more remote stretches will surely do well.

At the car it was nice to get packs off, retrieve a cold beer from the Yeti and start making our way to the accommodation in Merrijig.

The next day, I’d planned to walk and fish the Delatite track from Mirimbah to Buller. We parked at the playground and started there. Thinking the park area would see more than its fair share of swimmers and spin fishers, we were walking pretty briskly through when I noticed a shape move through the water column. I stopped and identified it as definitely a trout, crept into position, made the cast, and soon had a lovely brown to hand. Sight fishing is like a drug to me regardless of fish size, and I was absolutely buzzing after that.

We walked and fished our way upstream and the fishing was ridiculously good. Every decent drift rewarded. Every likely spot holding a fish or two. All fish happy to take the dry. The sun was out and we were able to spot more than a few. Even though the trout were small, it was champagne flyfishing on a 4 weight and so much fun.

Lauren had a great time. Is she a flyfisher now? Probably not, but at least she can see why I enjoy it so much. She made the comment about how nice it is to stand in the water and wade upstream. It gives a perspective on your surroundings that a hiking trail simply can’t match.

After such a tumultuous 2020, in just three days immersed in nature, we both felt happier for it. Physically tired perhaps, yet there is no better medicine than flyfishing for mental fatigue.