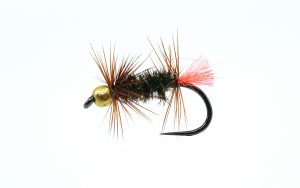 For me, the second half of this season in the highlands of Tasmania has been the most difficult I can remember. The first half started well with good and at times excellent fishing right through until early 2019. Even Arthurs Lakes was fishing a little like its former self. Then things started to heat up. Never can I remember guiding in the Highlands wearing shorts and sandals. The lakes and rivers became warmer than ideal and we had no useful rain. Understandably, the fishing became quite difficult; not what you look for as a flyfishing guide!

Then in mid-January, a band of dry electrical storms swept across the middle of the State, starting many fires along the way. One of these was christened the Great Pine Tier Fire. As the name suggests, it started on the Great Pine Tier, west of Lake Fergus. By the time it ran out of steam weeks later, it had burned north-east to Augusta Dam, along the Split Rock Range to Reynolds Neck, and south to the northern shores of Lake Big Jim and Lake Echo, then east to Waddamana, finally hitting the main Hobart road at around Blackmans Creek.

At my summer guiding base in Miena, we felt as if we were encircled by fire, with the town being evacuated. Of the four roads we use to access nearby waters, only the road to Poatina was not completely closed by fire. At least Great Lake gave us security from the north-east.

The Tasmanian Fire Service did a fine job of protecting the small communities of Little Pine, Reynolds Neck, Miena, Shannon, Penstock and Waddamana. Despite a few losses, overall the damage to infrastructure was limited for such a big fire. In particular I should mention the volunteers. Without their efforts, many more shacks would have been lost in the Central Highlands.

At a guiding level, the fires significantly affected our operation. The main impact was logistical, with many road and lake closures and the Miena area being closed to all but residents and emergency services personnel. As a result, we experienced several cancellations and had to spend significant time, energy and road miles relocating our operations to the north of the State, which was about the only area not affected by significant fires. I should note that after a couple of weeks of this, I was tired, frustrated by conflicting information around access and road closures, and just generally sick of everything smelling of smoke. Did I also mention the fishing was difficult!

Finally, on the 8th February, non-residents were allowed back into Miena. I had two American clients arriving on the 9th; the only problem was, the road to Thousand Lakes Lodge (where they had accommodation booked) was still closed and no other accommodation was available due to it all being used by emergency services personnel. Solution? They could stay with me at my shack in Miena.

On meeting Justin and Dan, I soon established that Justin was a fellow flyfishing guide and co-owned Big Sky Fly Fishing shop in West Yellowstone, while his long-time friend and client Dan, came from Fargo, North Dakota. Furthermore, Dan had a wood chipper the same as the one in the movie and he was going to be staying in my shack! (For those unfamiliar with the cult classic, Fargo is a quirky black comedy set in Fargo, North Dakota, where a wood chipper is used to dispose of bodies.) Would I sleep at all on that first night with these guys staying in my shack?

Of course, Justin and Dan proved to be great guys and I was looking forward to a week fishing with them. Then our run of hot weather changed. In fact, the temperature plummeted, and we woke to sub-zero temperatures and snow. Sometimes you just can’t win!

It was some relief to fish with such experienced and well-travelled anglers, who thoroughly appreciate the variability of the weather and fishing, especially in environments such as Tasmania. These guys never let the tough fishing faze them and thrilled in Tasmania’s unique environment, even catching some nice fish along the way.

One evening, Justin showed me a fly with the uninspiring name of ‘The Double-Hackle Peacock Nymph’, which he thought would work on our lakes. I liked the fly and suggested adding a bright fluoro tag, and a bead head. So, we tied up a couple to try on Woods Lake the following day.

Justin and Dan – the clothes tell the story of the weather, but the new fly helped ease the pain!

We went on to catch a dozen nice trout despite difficult windy, cold conditions, and all but one was taken on the new fly. Over a couple of whiskies back at the shack that night, we christened the fly the ‘Wood Chipper’ in honour of its Fargo connections!

I’ve frequently used the Wood Chipper ever since, and with consistent results. I fish it as part of either a team of nymphs, or traditional wet flies such as dabblers. I always tie the Wood Chipper on the point, as the bead anchors the cast and gains depth. Mix the retrieve up till you work out what the fish prefer. The Wood Chipper also works well as a ‘plonking’ fly, fished static under a large dry fly or indicator.

Another one of many nice fish taken on the Wood Chipper.

I have no idea what the trout take the Wood Chipper for, maybe a snail or stick caddis? Most likely it simply looks buggy and the fish notice it due to the tag.